To The Beautiful You

We're Getting Mutants in the MCU - The Loop

On 10 March 2011, SM Entertainment announced that they had acquired the rights to the manga and would be filming its Korean adaption. Representatives revealed, "The Korean version will have a total of 16 episodes that draw out stories of hopes and dreams. It’s a teenage comedy with a cute, but strong storyline and a slew of handsome cast members. We’re planning to begin airing it this summer." Rumors circulated that SHINee's Minho and f(x)'s Sulli would portray the two leads and on April 26, 2012 it was confirmed that they had been casted in the lead roles. It was also announced that Jun Ki Sang would be directing and that it would air in the latter half of the year on SBS. On May 24th, 2012 the title was revealed to be "To The Beautiful You" and would be written by Lee Young Chul, screenwriter of the High Kick! series. On June 6th, ZE:A's Kwanghee was confirmed for the drama and that Infinite's L was reviewing the offer to join, as he would have to juggle overseas schedules with filming. On June 7th Seo Jun Young was confirmed to be part of the cast On June 8th, it was announced that Kang Kyung Joon would be cast as the cool, but comical track coach, Gi Tae Young as the school nurse who discovers Jae-hee's identity, Lee Young Eun as a teacher caught in a love triangle with the two, Kang Ha Neul as Tae-joon's rival, and Ahn Hye Kyung and Lee Han Wee were also cast. After previous discussions for the role, Lee Hyun Woo was finally confirmed as Cha Eun Gyul.[11]Kim Ji Won was cast June 14th and Yoo Min Kyu was announced to play Young Mahn on July 10th. On July 12th, Ko So-young was confirmed as a cast member. The first script reading took place on June 7th at the SBS Ilsan Production Center. On July 9th, Minho, Sulli, Kwanghee and members of EXO were spotted taking part of a photoshoot for the drama. In preparation for his role as Taejoon, Minho received personal training from coach Kim Tae Young, former national high jump athlete and a member of the Korea Association of Athletics Federations, for a month and a half. His personal record at the end of July was 175 cm. Filming began at the beginning of July. In an interview with Vogue Girl Korea, Minho confirmed that the drama would broadcast on August 15th, rather than the initially scheduled August 8th. Hankuk Academy of Foreign Studies was used to film for the all-male school, Genie Athletic High School, and Anmyeondo was used to film the summer vacation scenes. The first scene Choi Minho filmed was a high jump scene. For the high jump scene, 105 high-speed cameras were used to film the high jumping in bullet time.

Kang Tae-joon (Minho) is a gold medalist in the high jump, but he has been mired in a slump due to an injury. In order to help her idol Tae-joon, a girl named Goo Jae-hee (Sulli) disguises herself as a boy and transfers to his all-male high school, Genie Athletic High School.

She disguises herself as a male and transfers to Tae-joon’s school to help him high jump again. Her english name is Jay.

He is a high jump gold medalist, who gives up high jumping after being injured.

He is charming soccer player and with his talents, good looks, and positive attitude, he receives a lot of love from girls. However, in reality, he’s an innocent boy who hasn’t been in love yet.

She is a gymnast and daughter from a rich family without any shortcomings. Although she possesses a reckless personality, in front of Tae-joon, she becomes a gentle lady.

He is a mysterious doctor who first realizes that Jae-hee is actually a girl pretending to be a boy in a boy's physical education high school. However, Min-woo doesn't reveal this truth and takes care of Jae-hee like her guardian angel.

He is the leader of Dormitory 2 and fencing team chief, who is macho-type with strong leadership skills

He is a hurdler who tries to annoy Jae-hee but he actually is a warm hearted person.

He is a high jump player in the national team and Tae-joon’s rival.

He is the leader of Dormitory 1, the Taekwondo department, and seems rough on the outside, but is actually very passionate about helping his hoobaes.

He is the leader of Dormitory 3, which is filled with the students who love theater and the arts.

He is a track coach who so strict that he is nicknamed 'rabies' as he is so harsh on the students but in front of So-jeong, he is just a man.

She is a perfectionist manager with a sports management agency with which the Tae-joon is signed. She knows no peace of mind as she deals with the players represented by the agency, yet displays talent and skills that are second to none.

She is a sports magazine reporter

He's very cold to his son on the outside, but actually cares a lot for his son. He can’t express his emotions well, so his relationship with his son is not very good.

She is the chairman of the board of trustees.

He is a dean of students

He is Jae-hee’s half-brother. After he goes to Korea, he finds out that Jae Hee is pretending to be a boy and has transferred to an all-boy’s school, and he tries to take her back to America.

She is the school president with gentle charisma 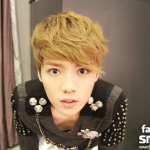